Home For Companies For Developers
Log in
Get started

Build on top of Cheeze Wizards

Join a global hackathon to build products and businesses on top of Cheeze Wizards’ open ecosystem.

What is Cheeze Wizards?

Cheeze Wizards, the world’s first blockchain battle royale (with cheese), is a new game from the creators of CryptoKitties. The inaugural Cheeze Wizards tournament promises to be the party of the summer for the crypto enthusiasts across the globe.

In Cheeze Wizards, players use ether to summon Wizards, each represented by a non-fungible token (NFT). Players use their Wizards to compete in a series of duels that make up the Cheeze Wizard Tournament. Every Wizard summoned grows the tournament’s grand prize, known as the Big Cheeze. Wizards battle in one-on-one duels, with the winner gaining a portion of the losing Wizard’s power proportional to their victory. The last and most powerful Wizard in the tournament claims the title and prize of Big Cheeze.

During the weeklong presale, the Big Cheeze grand prize grew to over 600 ETH. The Big Cheeze will only get bigger when players can once again summon wizards at the beginning of the first Cheeze Wizards’ tournament, currently scheduled to begin during the hackathon.

Why hack on Cheeze Wizards?

One of blockchain’s best qualities is the freedom for anyone to build on top of their favorite dapps––all without having to ask for parmesan!

As players are eliminated from the Cheeze Wizards tournament, they’re going to be looking for interesting things to do with their Wizards. Participating in the hackathon is a rare opportunity to get a qualified and already-engaged user base before you even start your project.

A diverse panel of industry heavyweights will judge projects, and there’s a whole host of rewards waiting to be won.

Devcon tickets for your whole team

Partner Offers, including 25% discount on smart contract audits from Sigma Prime and 50% discount for 6 months from Alchemy”

Partner Offers, including 25% discount on smart contract audits from Sigma Prime and 50% discount for 6 months from Alchemy” 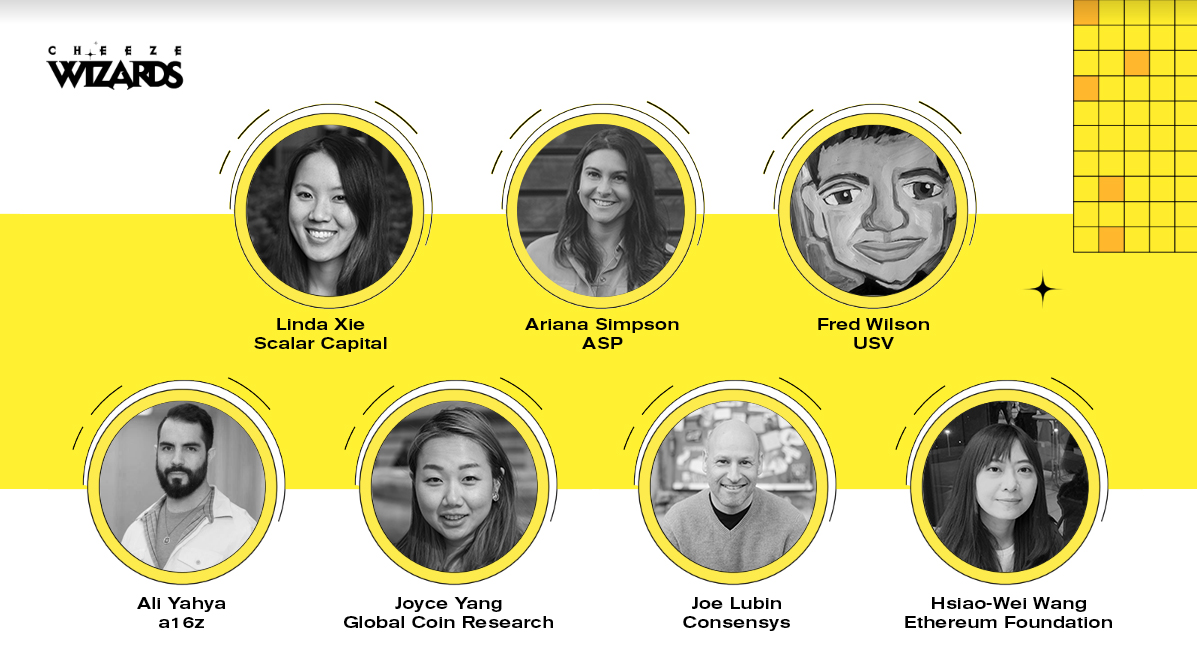 Jobs Help Contact Privacy Terms Legal Blog
This site is operated by Amalgamated Token Services Inc. through its wholly-owned subsidiary, CoinList Services, LLC (together, “CoinList”), which is not a registered broker-dealer. CoinList does not give investment advice, endorsement, analysis or recommendations with respect to any securities or provide legal or tax advice. All securities listed here are being offered by, and all information included on this site is the responsibility of, the applicable issuer of such securities. Neither CoinList nor any of its officers, directors, agents, and employees makes any warranty, express or implied, of any kind whatsoever related to the adequacy, accuracy or completeness of any information on this site or the use of information on this site. This site contains external links to third-party content (content hosted on sites unaffiliated with CoinList). As such, CoinList makes no representations or endorsements whatsoever regarding any third-party content/sites that may be accessible directly or indirectly from this site.
All securities-related activity is conducted by EC Securities, LLC (“EC Securities”), an affiliate of CoinList, a registered broker-dealer and member FINRA/SIPC, located at 850 Montgomery St. Suite 350, San Francisco, CA 94133. EC Securities does not make investment recommendations, and no communication, through this website or in any other medium, should be construed as a recommendation for any security offered on or off this investment platform. These securities are not FDIC or SIPC insured and there is no bank or other guarantee if they lose value. Please review the background of our broker-dealer and investment professionals on FINRA’s broker/check. Please also review our Form CRS, a uniform customer relationship summary and disclosure template prescribed by the SEC, that provides succinct and relevant information to retail investors and enables comparability between broker-dealers with respect to fees, conflicts, and services provided.
All cryptocurrency trading and related services are provided by CoinList Markets LLC (“CoinList Markets”) NMLS #1785267, an affiliate of CoinList and a Money Services Business registered with Financial Crimes Enforcement Network and certain states as a money transmitter.
All lending services are provided by Coinlist Lend LLC, an affiliate of Coinlist and a proprietary cryptocurrency lender.
Certain services may be limited to residents of certain jurisdictions, and certain disclosures are required in certain jurisdictions, available here.
Potential investors must conduct their own due diligence of any issuer, cryptocurrency, token or token-based security. Investing in cryptocurrencies, tokens and token-based securities is highly risky and may lead to total loss of investment. Use of the site is subject to certain risks, including but not limited to those listed here.
All activities on this site are governed by our Terms of Service and Privacy Policy which you agree to by using this site. CoinList and the employees, officers, directors and affiliates of CoinList may own equity, tokens or other interests in companies using the site and may also participate in certain current offerings using the site (where permitted). CoinList services are not being directed toward the residents of any jurisdictions outside of the United States of America.
Copyright © 2020 CoinList