Let's understand in more detail what these properties are.

If E is an elliptic curve defined over the field \mathbb{F}_q with a prime order r subgroup, we say E is pairing-friendly if r divides q^k - 1 for some k \leq 50. The embedding degree of E is defined to be the smallest such k.

Fact 1: A pairing-friendly elliptic curve with an order r subgroup yields a SNARK construction for proving things about computations that use \mathbb{F}_r arithmetic.

If you don't know what pairing-friendly curves are, please click here for some background.

Now, if we want to compose proofs together, we'll need a SNARK for the computation of verifying those proofs. For this, it's useful to know the following fact about what kind of computation the SNARK verifier performs.

Fact 2: An elliptic-curve defined over \mathbb{F}_q yields a SNARK construction whose verification algorithm is efficiently expressed using \mathbb{F}_r arithmetic. In other words, verification is done efficiently using arithmetic in a field equal to the order of the subgroup of the original elliptic curve.

That is, to check E_1's verifier, by fact 2 you need a SNARK which can check \mathbb{F}_q arithmetic, which by fact 1 means you need a curve with an order \mathbb{q} subgroup.

Keeping track of the respective qs and rs here may be a little confusing, but to restate, with E_1​ defined over a field \mathbb{F}_q, and with a subgroup of order r, we have that:

If this is still only partially making sense, the diagram in the section below shows an instantiation, which will help further clarify the relationship between rs and qs.

Definition: A pairing-friendly graph of elliptic curves is a directed graph G = (V, A) along with some data associated to every vertex. Namely, for each vertex v \in V we have an elliptic curve E_v such that

Here is an example of a pairing-friendly graph of curves. 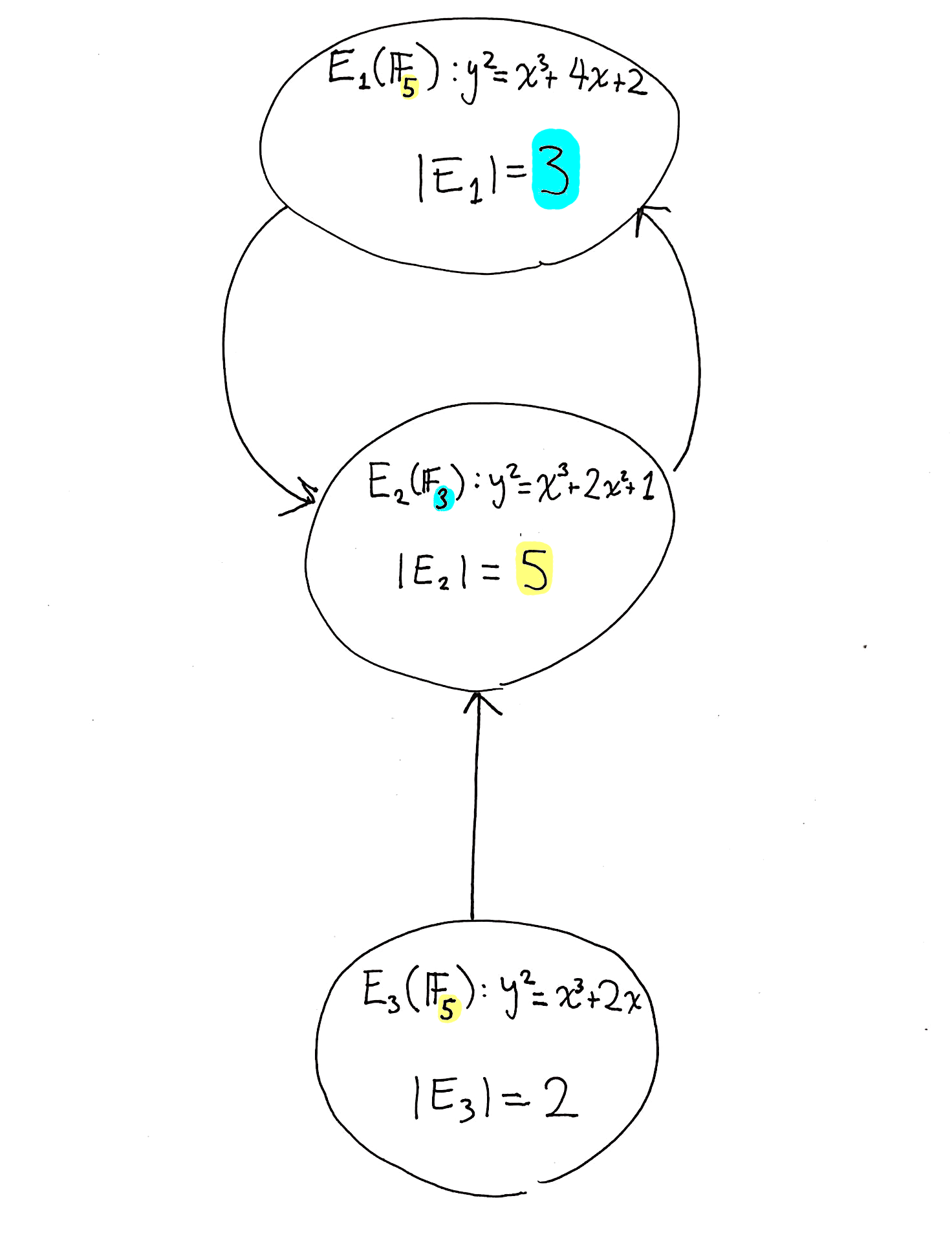 Note that to each vertex v we can also associate a SNARK construction (say Groth16) for verifying \mathbb{F}_{r_v} arithmetic computations obtained using the elliptic curve associated to that vertex combined with fact 1.

This definition tells us that we can compose proofs whenever there's an edge.

For this, we'd need a pairing-friendly graph that contains an arbitrarily long path of curves. There are two ways of achieving this:

Pairing-friendly elliptic curves are pretty rare, so I doubt option 1 is going to fly. Option 2 however is in fact realistic and Coda is built on the pairing-friendly cycle consisting of the curves MNT4-753 and MNT6-753.

So, if we want to do unbounded composition, we need a graph with a cycle. What's not clear though is why you would want anything but a cycle. That is, what is the use of the vertices in the graph that do not lie on the cycle?

The problem stems from the fact that we actually only know of one way to construct cycles of elliptic curves (namely, via MNT4/MNT6 cycles) and the curves in these cycles have bad parameters from an efficiency perspective: the curves have relatively low embedding degree (4 and 6) which means we must take the size of base field to be quite large (on the order of 768 bits) in order to achieve roughly 128 bits of security.

In Coda, this inefficiency affects not only the SNARK prover but leaks into the rest of the application as well. The reason is that our SNARK needs to certify all cryptographic computations in Coda (signatures, hashes, etc.) and so those primitives need to be efficiently described using \mathbb{F}_r arithmetic (where r is the order of one of the curves in our cycle). But r is large (about 753 bits in our case) which means outside of the SNARK, our cryptographic operations are a lot slower than they could be.

Moreover, this paper of Chiesa, Chua, and Weidner rules out a few potential strategies for constructing other cycles of elliptic curves. So, if we cannot find new cycles (though you may very well be able to, we just don't know how yet) we need another technique for reducing the impact of the large field size in known cycles.

This is where the other vertices in a pairing-friendly graph of curves come into play. Suppose our graph has a vertex v from which we can reach a cycle. Suppose moreover that r_v and/or q_v were relatively small compared to the parameters of the curves on the cycle. Say, r could be on the order of 2^{256}. Then we'd be in a good position: we could perform the bulk of the computation in our proofs in \mathbb{F}_r using the SNARK construction associated to v, and then just use the big curves in the cycle for composition and combining proofs. That is, just use the cycle for the relatively small computation of checking other verifiers.

Note that the construction described in the preceding paragraph doesn't use the whole graph but just a subgraph consisting of a path terminating in a cycle.

Let's give such a graph a name.

One more restriction on the curves

There is one more constraint we should place on the curves in any graph we consider if we want to get efficient SNARK constructions. Namely, for every vertex v in a given graph, we would like r_v - 1 to have a large smooth part.

The reason one imposes this restriction is that if r_v has a large smooth part, one can more efficiently perform an FFT over the field \mathbb{F}_{r_v} which is part of the SNARK prover.

The goal of this challenge is to construct a (k, n)-smooth lollipop of pairing-friendly curves as described above such that every curve in the lollipop has at least 120 bits of security. The quality of a lollipop will be defined using a combination of the following criteria:

These parameters affect the efficiency of the overall construction in a specific but difficult to specify way, so we will take them all into account when judging submissions.

The best currently-known lollipop of curves is an MNT4/6 cycle with the following quality metrics:

Here are the parameters of the MNT4 curve and the MNT6 curve.

Your submission should consist of the following (the more items included the better):

Jobs Help Contact Privacy Terms Legal Blog
This site is operated by Amalgamated Token Services Inc. through its wholly-owned subsidiary, CoinList Services, LLC (together, “CoinList”), which is not a registered broker-dealer. CoinList does not give investment advice, endorsement, analysis or recommendations with respect to any securities or provide legal or tax advice. All securities listed here are being offered by, and all information included on this site is the responsibility of, the applicable issuer of such securities. Neither CoinList nor any of its officers, directors, agents, and employees makes any warranty, express or implied, of any kind whatsoever related to the adequacy, accuracy or completeness of any information on this site or the use of information on this site. This site contains external links to third-party content (content hosted on sites unaffiliated with CoinList). As such, CoinList makes no representations or endorsements whatsoever regarding any third-party content/sites that may be accessible directly or indirectly from this site.
All securities-related activity is conducted by EC Securities, LLC (“EC Securities”), an affiliate of CoinList, a registered broker-dealer and member FINRA/SIPC, located at 850 Montgomery St. Suite 350, San Francisco, CA 94133. EC Securities does not make investment recommendations, and no communication, through this website or in any other medium, should be construed as a recommendation for any security offered on or off this investment platform. These securities are not FDIC or SIPC insured and there is no bank or other guarantee if they lose value. Please review the background of our broker-dealer and investment professionals on FINRA’s broker/check.
All cryptocurrency trading and related services are provided by CoinList Markets LLC (“CoinList Markets”) NMLS #1785267, an affiliate of CoinList and a Money Services Business registered with Financial Crimes Enforcement Network and certain states as a money transmitter.
All lending services are provided by Coinlist Lend LLC, an affiliate of Coinlist and a proprietary cryptocurrency lender.
Certain services may be limited to residents of certain jurisdictions, and certain disclosures are required in certain jurisdictions, available here.
Potential investors must conduct their own due diligence of any issuer, cryptocurrency, token or token-based security. Investing in cryptocurrencies, tokens and token-based securities is highly risky and may lead to total loss of investment. Use of the site is subject to certain risks, including but not limited to those listed here.
All activities on this site are governed by our Terms of Service and Privacy Policy which you agree to by using this site. CoinList and the employees, officers, directors and affiliates of CoinList may own equity, tokens or other interests in companies using the site and may also participate in certain current offerings using the site (where permitted). CoinList services are not being directed toward the residents of any jurisdictions outside of the United States of America.
Copyright © 2020 CoinList